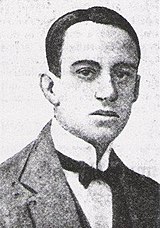 gal has its origins in June 1902, when young men Francisco da Ponte, Horta Gavazzo and his brother José Maria decided to create Sport Club de Belas. This club, the first ancestor of Sporting, played just one match and at the end of the year’s summer, disbanded. Two years later, the idea of creating a football club was revived, and this time, with the Gavazzo brothers joined by José Alvalade and José Stromp: a new club, the Campo Grande Football Club, was founded. They played their matches on the estate of the Viscount of Alvalade, José Alvalade’s grandfather, with the club’s headquarters located in Francisco Gavazzo’s home.

For two years, the club developed an intense activity on several sports, namely football, tennis and fencing. The club also organized parties and picnics. Eventually, during one picnic, on 12 April 1906, discussions erupted, as some members defended that the club should only focused on organizing picnics and social events, with another group defending that the club should focused on the practising of sports instead. Some time later, José Gavazzo, José Alvalade and 17 other members left the club, with the latter saying, “I am going to have with me my grandfather and he will give me the money to make another club. As such, a new club, Campo Grande Sporting Clube, was founded. The Viscount of Alvalade, whose money helped to fund the club, was the first president of Sporting. José Alvalade, as one of the main founders, uttered on behalf of himself and his fellow co-founders, “We want this club to be a great club, as great as the greatest in Europe.” Three months later, on 1 July 1906, António Félix da Costa Júnior suggested the name Sporting Clube de Portugal, and this date is considered the official day Sporting was founded.

The year 1907 marked some “firsts” for the club, as Sporting played the first football match of their history on 3 February, ending in a 5–1 defeat against third division club Cruz Negra; inaugurated their first ground, known as “Sítio das Mouras” (the most advanced in Portugal at the time, equipped with showers, two tennis courts, an athletics track and a football field) on 4 July; and played the first derby of all time against local rivals S.L. Benfica (then known as Grupo Sport Lisboa) on 1 December.

The club also released their first report card on 31 March 1922, titled “Boletim do Sporting” (Sporting’s Report), lending the foundation for the later called “Jornal do Sporting”, the official newspaper of the club, that still exists today.

Sporting played their first Primeira Liga game (the 1st Division of Portuguese football) ever on 20 January 1935, winning 0–6 against Académica de Coimbra. A year later, in 1936, the club had their heaviest defeat ever against Porto, losing 10–1. Sporting, however, got their revenge a year later, when they humbled the same team with a 9–1 result. In 1941, under the guidance of Hungarian manager József Szabó, the club celebrated the first league title of their history. 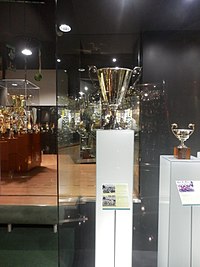 Sporting and the Yugoslavian team Partizan both made history on 4 September 1955, as they played the first-ever UEFA Champion Clubs’ Cup match. Sporting player João Martins scored the first-ever goal of the competition, on the 14th minute. The match ended in a 3–3 draw.

Sporting also inaugurated their new venue, José Alvalade Stadium, on 10 June 1956. This stadium was the home ground of the club until 2003.

In the 1960s, Sporting achieved overseas success, winning the 1963–64 UEFA Cup Winners’ Cup, defeating MTK Budapest of Hungary in the final. It was the only time a Portuguese team side won a UEFA Cup Winners’ Cup title. The team entered the competition defeating Atalanta in the qualifying round, then past Cypriot club APOEL in what was the biggest win in a single UEFA competitions game to date: 16–1, a record that still stands today. On the next round, they lost 4–1 to Manchester United at Old Trafford in the first hand, but made a remarkable comeback at home, winning 5–0. In the semi-finals, Sporting eliminated Lyon, and in the end MTK Budapest, in a two-round final to win their first European title. The winning goal was scored by João Morais from a direct corner kick.

The club reached the semi-finals of the Cup Winners’ Cup in 1974, but lost to eventual winners 1. FC Magdeburg of East Germany.

In the years between 1982 and 2000, Sporting suffered from a drought of titles. Despite defeating rivals Benfica 4–0 on aggregate to win the Portuguese Super Cup in 1987, Sporting fans had to wait until 1995 to see their team win some silverware after beating Club Sport Marítimo 2–0 in the final of the 1995 Portuguese Cup. That victory granted Sporting a place in the following season’s Portuguese Super Cup. After drawing 0–0 at Estádio José Alvalade and securing a 2–2 draw at Estádio das Antas on 30 April 1996, a replay match was held at the Parc de Princes in Paris. Sporting won 3–0 with Sá Pinto scoring twice and Carlos Xavier scoring a stoppage time penalty. In the same 1995–96 season, Sporting also reached the Portuguese Cup final but lost 3–1 to Benfica.

In 2000, Sporting, led by manager Augusto Inácio (a former Sporting player, who replaced Giuseppe Materazzi at the beginning of the season), won the league title on the last match day, with a 4–0 victory over Salgueiros, ending an 18-year drought.

In the 2001–02 season, Sporting conquered the league title, the Portuguese Cup 2001–02 and the 2002 Portuguese Super Cup. Sporting also had back-to-back wins in the Portuguese Cup in 2007 and 2008. In 2005 Sporting reached their second European final, the 2005 UEFA Cup Final. Playing at their home ground, the team lost 3–1 against Russian club CSKA Moscow. The club almost reached another European final in 2012, but were dropped out of the competition by Athletic Bilbao, in the semi-finals of the 2011–12 Europa League. Sporting also reached, for the first time, the knockout phase of UEFA Champions League, in the 2008–09 season, but were roundly defeated by FC Bayern Munich, with an aggregate loss of 12–1. This is widely regarded as one of the lowest points in the history of the club.

Also, years of financial mismanagement almost led to the demise of the club. In 2011, the club had amassed debts of over €276 million. The results on the pitch were also abysmal, with Sporting finishing seventh – their lowest position ever in the league table – in the 2012–13 Primeira Liga. After immense pressure both from within and outside the club, Godinho Lopes, then-president of Sporting, resigned. Bruno de Carvalho was his successor. Carvalho’s intentions were to negotiate with the banks and return success to the club, while threatening to take Godinho Lopes to court.

The 2013–14 season saw improvements in the results, as Sporting finished second in the table, thus gaining direct access to the 2014–15 UEFA Champions League, the first time in five years the club reached the top-tier of European competitions.

In the 2014–15 season, Sporting won their 16th Portuguese Cup in dramatic fashion. The Lisbon side, led by Marco Silva, played the final against Braga, and after a disastrous start, found themselves losing 0–2 at half-time and playing with ten men after the sending-off of Cédric Soares. With the final seemingly lost, Islam Slimani gave some hope to the fans as he scored the 1–2 on the 83 minute. In stoppage time, Fredy Montero managed to equalize, forcing extra-time. Sporting ultimately won the match 3–1 on penalties. Celebrations ended in a pacific pitch invasion of Estádio José Alvalade by the fans, as the club touched silverware for the first time in seven years.

In June 2015, Jorge Jesus joined Sporting after Benfica opted not to renew his contract as coach of the club, signing a three-year contract. Presented as the new manager of the club on 1 July, the managerial change took the rivalry of both Lisbon clubs to new heights. Some Portuguese media called the event “O Verão Quente de 2015” (“The Hot Summer of 2015”). Under Jesus’ tenure, Sporting won the Portuguese Super Cup for the eighth time, against back-to-back champions Benfica (1–0). Despite a positive start, Sporting did not win any other trophy, finishing second in the Primeira Liga with 86 points, two points behind Benfica, despite breaking the former points record in the league. The 2016–17 season was trophyless.