Liverpool F.C. was founded following a dispute between the Everton committee and John Houlding, club president and owner of the land at Anfield. After eight years at the stadium, Everton relocated to Goodison Park in 1892 and Houlding founded Liverpool F.C. to play at Anfield. Originally named “Everton F.C. and Athletic Grounds Ltd” (Everton Athletic for short), the club became Liverpool F.C. in March 1892 and gained official recognition three months later, after The Football Association refused to recognise the club as Everton. The team won the Lancashire League in its début season, and joined the Football League Second Division at the start of the 1893–94 season. After finishing in first place the club was promoted to the First Division, which it won in 1901 and again in 1906.

Liverpool reached its first FA Cup Final in 1914, losing 1–0 to Burnley. It won consecutive League championships in 1922 and 1923, but did not win another trophy until the 1946–47 season, when the club won the First Division for a fifth time under the control of ex-West Ham Utd centre half George Kay. Liverpool suffered its second Cup Final defeat in 1950, playing against Arsenal. The club was relegated to the Second Division in the 1953–54 season. Soon after Liverpool lost 2–1 to non-league Worcester City in the 1958–59 FA Cup, Bill Shankly was appointed manager. Upon his arrival he released 24 players and converted a boot storage room at Anfield into a room where the coaches could discuss strategy; here, Shankly and other “Boot Room” members Joe Fagan, Reuben Bennett, and Bob Paisley began reshaping the team. 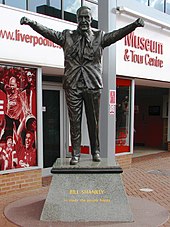 The club was promoted back into the First Division in 1962 and won it in 1964, for the first time in 17 years. In 1965, the club won its first FA Cup. In 1966, the club won the First Division but lost to Borussia Dortmund in the European Cup Winners’ Cup final. Liverpool won both the League and the UEFA Cup during the 1972–73 season, and the FA Cup again a year later. Shankly retired soon afterwards and was replaced by his assistant, Bob Paisley. In 1976, Paisley’s second season as manager, the club won another League and UEFA Cup double. The following season, the club retained the League title and won the European Cup for the first time, but it lost in the 1977 FA Cup Final. Liverpool retained the European Cup in 1978 and regained the First Division title in 1979. During Paisley’s nine seasons as manager Liverpool won 21 trophies, including three European Cups, a UEFA Cup, six League titles and three consecutive League Cups; the only domestic trophy he did not win was the FA Cup.

Paisley retired in 1983 and was replaced by his assistant, Joe Fagan. Liverpool won the League, League Cup and European Cup in Fagan’s first season, becoming the first English side to win three trophies in a season. Liverpool reached the European Cup final again in 1985, against Juventus at the Heysel Stadium. Before kick-off, Liverpool fans breached a fence which separated the two groups of supporters, and charged the Juventus fans. The resulting weight of people caused a retaining wall to collapse, killing 39 fans, mostly Italians. The incident became known as the Heysel Stadium disaster. The match was played in spite of protests by both managers, and Liverpool lost 1–0 to Juventus. As a result of the tragedy, English clubs were banned from participating in European competition for five years; Liverpool received a ten-year ban, which was later reduced to six years. Fourteen Liverpool fans received convictions for involuntary manslaughter.

Fagan had announced his retirement just before the disaster and Kenny Dalglish was appointed as player-manager. During his tenure, the club won another three League Championships and two FA Cups, including a League and Cup “Double” in the 1985–86 season. Liverpool’s success was overshadowed by the Hillsborough disaster: in an FA Cup semi-final against Nottingham Forest on 15 April 1989, hundreds of Liverpool fans were crushed against perimeter fencing. Ninety-four fans died that day; the 95th victim died in hospital from his injuries four days later and the 96th died nearly four years later, without regaining consciousness. After the Hillsborough disaster there was a government review of stadium safety. The resulting Taylor Report paved the way for legislation that required top-division teams to have all-seater stadiums. The report ruled that the main reason for the disaster was overcrowding due to a failure of police control.

Liverpool was involved in the closest finish to a league season during the 1988–89 season. Liverpool finished equal with Arsenal on both points and goal difference, but lost the title on total goals scored when Arsenal scored the final goal in the last minute of the season. 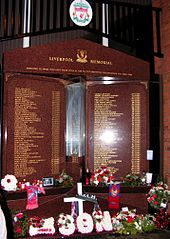 Dalglish cited the Hillsborough disaster and its repercussions as the reason for his resignation in 1991; he was replaced by former player Graeme Souness. Under his leadership Liverpool won the 1992 FA Cup Final, but their league performances slumped, with two consecutive sixth-place finishes, eventually resulting in his dismissal in January 1994. Souness was replaced by Roy Evans, and Liverpool went on to win the 1995 Football League Cup Final. While they made some title challenges under Evans, third-place finishes in 1996 and 1998 were the best they could manage, and so Gérard Houllier was appointed co-manager in the 1998–99 season, and became the sole manager in November 1998 after Evans resigned. In 2001, Houllier’s second full season in charge, Liverpool won a “Treble”: the FA Cup, League Cup and UEFA Cup. Houllier underwent major heart surgery during the 2001–02 season and Liverpool finished second in the League, behind Arsenal. They won a further League Cup in 2003, but failed to mount a title challenge in the two seasons that followed.

Houllier was replaced by Rafael Benítez at the end of the 2003–04 season. Despite finishing fifth in Benítez’s first season, Liverpool won the 2004–05 UEFA Champions League, beating A.C. Milan 3–2 in a penalty shootout after the match ended with a score of 3–3. The following season, Liverpool finished third in the Premier League and won the 2006 FA Cup Final, beating West Ham United in a penalty shootout after the match finished 3–3. American businessmen George Gillett and Tom Hicks became the owners of the club during the 2006–07 season, in a deal which valued the club and its outstanding debts at £218.9 million. The club reached the 2007 UEFA Champions League Final against Milan, as it had in 2005, but lost 2–1. During the 2008–09 season Liverpool achieved 86 points, its highest Premier League points total, and finished as runners up to Manchester United. 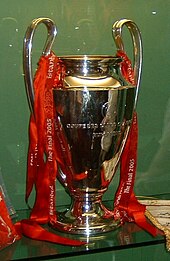 In the 2009–10 season, Liverpool finished seventh in the Premier League and failed to qualify for the Champions League. Benítez subsequently left by mutual consent and was replaced by Fulham manager Roy Hodgson. At the start of the 2010–11 season Liverpool was on the verge of bankruptcy and the club’s creditors asked the High Court to allow the sale of the club, overruling the wishes of Hicks and Gillett. John W. Henry, owner of the Boston Red Sox and of Fenway Sports Group, bid successfully for the club and took ownership in October 2010. Poor results during the start of that season led to Hodgson leaving the club by mutual consent and former player and manager Kenny Dalglish taking over. In the 2011–12 season, Liverpool secured a record 8th League Cup success and reached the FA Cup final, but finished in eighth position, the worst league finish in 18 years; this led to the sacking of Dalglish. He was replaced by Brendan Rodgers, whose Liverpool team in the 2013–14 season mounted an unexpected title charge to finish second behind champions Manchester City and subsequently return to the Champions League, scoring 101 goals in the process, the most since the 106 scored in the 1895–96 season. Following a disappointing 2014–15 season, where Liverpool finished sixth in the league, and a poor start to the following campaign, Rodgers was sacked in October 2015. He was replaced by Jürgen Klopp, who in his first season at Liverpool, took the club to the finals of both the Football League Cup and UEFA Europa League, finishing as runner-up in both competitions.