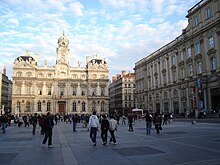 Olympique Lyonnais was initially formed under the multisports club Lyon Olympique Universitaire, which was originally formed in 1896 as Racing Club de Lyon. Following numerous internal disagreements regarding the cohabitation of amateurs and professionals within the club, then-manager of the club Félix Louot and his entourage contemplated forming their own club. On 3 August 1950, Louot’s plan came to fruition when Olympique Lyonnais was officially founded by Dr. Albert Trillat and numerous others. The club’s first manager was Oscar Heisserer and, on 26 August 1950, played its first official match defeating CA Paris-Charenton 3–0 in front of 3,000 supporters. In just the club’s second year of existence, Lyon was crowned champion of the second division, securing promotion to the first division. The club maintained its first division place for the remainder of the decade, excluding a year’s stint in the second division for the 1953–54 season.

In June 1987, Lyon was bought by Rhône businessman Jean-Michel Aulas who took control of the club aiming to turn Lyon into an established Ligue 1 side. His ambitious plan, titled OL – Europe, was designed to develop the club at the European level and back into the first division within a period of no more than four years. The first manager under the new hierarchy was Raymond Domenech. The aspiring chairman gave Domenech carte blanche to recruit whoever he saw fit to help the team reach the first division. They went on to accomplish this in Domenech’s first season in charge. Lyon achieved its zenith under Domenech when it qualified for the UEFA Cup. For the remainder of his tenure, however, the club underachieved. Domenech was replaced by former French international Jean Tigana, who led the team to an impressive second place in the 1994–95 season.

At the start of the new millennium, Lyon began to achieve greater success in French football. The club established itself as the premiere club in France defeating Marseille and Paris Saint-Germain and also became France’s richest club as well as one of the most popular. Lyon became known for developing promising talent who went on to achieve greatness not only in France, but also abroad and internationally. Notable examples include Michael Essien, Florent Malouda, Sidney Govou, Juninho, Cris, Éric Abidal, Mahamadou Diarra, Patrick Müller and Karim Benzema. Lyon won its first ever Ligue 1 championship in 2002, starting a national record-breaking streak of seven successive titles. During that run the club also won one Coupe de France title, its first Coupe de la Ligue title and a record six Trophée des Champions. The club also performed well in UEFA competitions, reaching as far as the quarter-finals on three occasions and the semi-finals in 2010 in the UEFA Champions League. Lyon’s streak and consistent dominance of French football came to an end during the 2008–09 season, when it lost the title to Bordeaux.