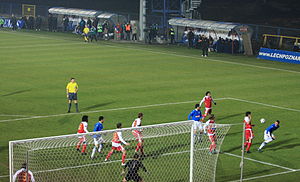 Match between Lech Poznan and Deportivo La Coruña in 2008–09 season.

The UEFA Cup was preceded by the Inter-Cities Fairs Cup, which was a European football competition played between 1955 and 1971. The competition grew from 11 teams during the first cup (1955–58) to 64 teams by the last cup which was played in 1970–71. It had become so important on the European football scene that in the end it was taken over by UEFA and relaunched the following season as the UEFA Cup.

The UEFA Cup was first played in the 1971–72 season, with an all-English final of Wolverhampton Wanderers against Tottenham Hotspur, with Spurs taking the first honours. The title was retained by another English club, Liverpool, in 1973, who defeated Borussia Mönchengladbach in the final. Borussia would win the competition in 1975 and 1979, and reach the final again in 1980. Liverpool won the competition for the second time in 1976 after defeating Club Brugge in the final.

During the 1980s, IFK Göteborg (1982 and 1987) and Real Madrid (1985 and 1986) won the competition twice each, with Anderlecht reaching two consecutive finals, winning in 1983 and losing to Tottenham Hotspur in 1984. The year 1989 saw the commencement of the Italian clubs’ domination, when Diego Maradona’s Napoli defeated Stuttgart. The 1990s started with two all-Italian finals, and in 1992, Torino lost the final to Ajax on the away goals rule. Juventus won the competition for a third time in 1993 and Internazionale kept the cup in Italy the following year. The year 1995 saw a third all-Italian final, with Parma proving their consistency, after two consecutive Cup Winners’ Cup finals. The only final with no Italians during that decade was in 1996. Internazionale reached the final the following two years, losing in 1997 to Schalke 04 on penalties, and winning yet another all-Italian final in 1998, taking home the cup for the third time in only eight years. Parma won the cup in 1999, which ended the Italian club era.

Liverpool won the competition for the third time in 2001 and Porto triumphed in the 2003 and 2011 tournaments, with the latter against Portuguese team Braga. In 2004, the cup returned to Spain with Valencia being victorious, and then Sevilla succeeded on two consecutive occasions in 2006 and 2007, the latter in a final against fellow Spaniards Espanyol. Either side of Sevilla’s success, two Russian teams, CSKA Moscow in 2005 and Zenit Saint Petersburg in 2008, had their glory and yet another former Soviet club, Ukraine’s Shakhtar Donetsk, won in 2009. Atlético Madrid would themselves win twice in three seasons, in 2010 and 2012, the latter in another all-Spanish final. In 2013, Chelsea would become the first Champions League holders to win the UEFA Cup/Europa League the following year. In 2014, Sevilla won their third cup in eight years after defeating Benfica on penalties. Just one year later, in 2015, Sevilla won their fourth UEFA Cup/Europa League, becoming the most successful club in the competition.

Since the 2009–10 season, the competition has been known as the UEFA Europa League. At the same time, the UEFA Intertoto Cup, UEFA’s third-tier competition, was discontinued and merged into the new Europa League.